The annual Haaretz newspaper’s Conference for Democracy was co-sponsored this year by Zulat and the New Israel Fund. The conference was held in the presence of President Yitzhak Herzog, and attended by hundreds of participants, including government ministers, Knesset members, academics, and representatives of civil society organizations.

President Herzog said in his opening remarks: “Israeli democracy has firmly withstood the stormy winds of recent years and retained its qualities. I want to talk about the threats it faces, the biggest of which is the erosion of the public’s trust in it.” 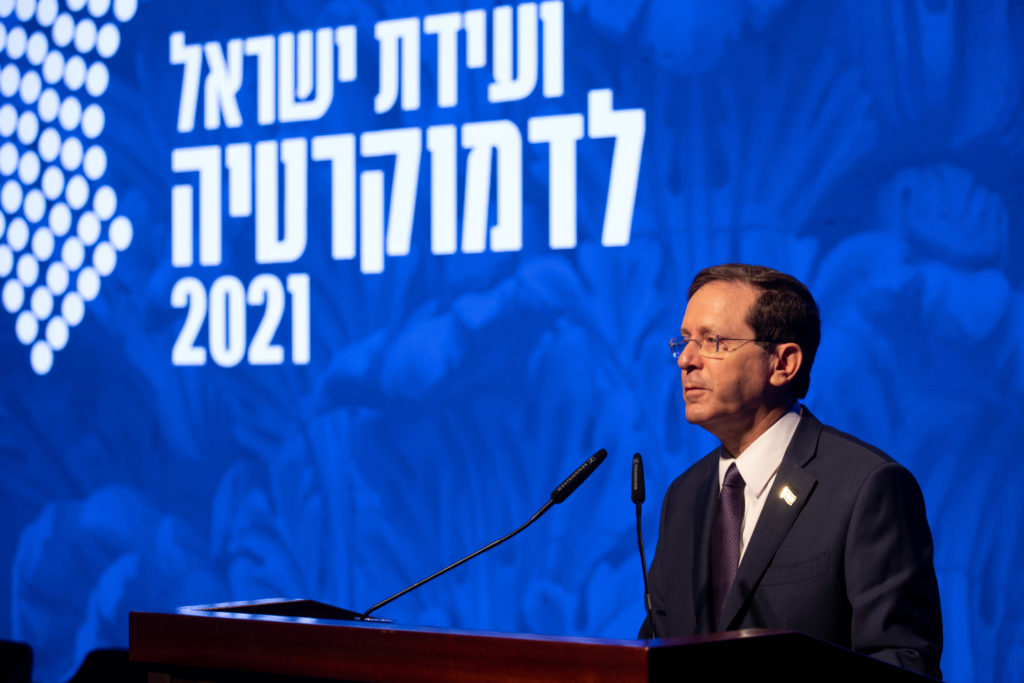 Zehava Galon, president of Zulat, said in her opening remarks:

“The State of Israel cannot live with a chokehold around the neck of 20 percent of its citizens, just as it will not be able to go on living with a chokehold around the neck of millions of Palestinians, as it has done through 54 years of occupation. Ahead of us is an opportunity to advance a civic agenda that strives for national and civic equality andwhere security forces protect the state but do not run the lives of the citizens, to promote an agenda that is based on partnership and equality between Jews and Arabs, and to work toward the finalization of a humane and progressive constitution that will entrench the protection of human rights.“

NIF’s executive director Mickey Gitzin said in his address: “There is no change without a struggle. What seems obvious to us is the fruit of a stubborn and not always popular effort. The elephant in the room is that people thought twice about coming here today. Some of them took frightand cancelled their attendance for fear of being associated with an entity that has been marked as an enemy of the people.”

The opening remarks were followed by the panel “Israel – Democratic or Populist“ with the participation of Zulat’s executive director Einat Ovadia and Dr. Rawia Aburabia, a member of Zulat’s steering committee.

Einat presented Zulat’s latest report on the fake news phenomenon and our attendant legislative initiatives. “I am well aware of the potential danger of setting limits to freedom of expression, but the combination of fake news and unscrupulous populist politicians confronts us with the possibility of the destruction of the entire democratic system,” said Einat.

Dr. Rawia Aburabia said: “Populism slowly corrodes state apparatuses and gatekeepers, and like Hungary or Poland, one suddenly realizes that democracy is no more. Israel’s democratic space is shaky to begin with, as it is impossible to talk about a Western-like democracy in the face of the occupation and the Nationality Law.”

Another panel, “Corona’s Economic Victims,” saw the participation of Dr. Maha Karkabi-Sabbah, a member of Zulat’s steering committee. “Women paid a heavier price than men did as a result of the corona pandemic,” Maha said. “An ethnic look reveals that marginalized minority groups such as the Arabs paid a higher price than strong groups like the Jews.”